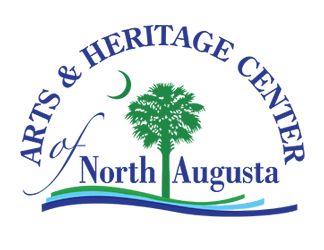 The SCNHC extends throughout 17 counties of the state, from the mountains of Oconee County, along the Savannah River to the wharves and up the coast to Georgetown. The Corridor is divided into four distinct regions that together provide a cross-section of the landscape, history and culture of the area. Through museums, interpretative signage, and travel guides, the Heritage Corridor Discovery System leads visitors on a self guided journey through rural communities and historic backroads to experience the people and places of South Carolina.

The Arts and Heritage Center of North Augusta serves as a Discovery Center: a gateway into the region through interpretation and visitors services. A Discovery Center is designed to send the visitor out to designated sites. These sites are heritage attractions with interpretive signage that introduces the Discovery System, a profile of the location, an overview of relevant theme(s), and directions to other nearby destinations.

As part of this partnership, the AHCNA has ownership of the regional history exhibits from the SCNHCs former Discovery Center in Blackville, SC. By using these educational and technological exhibits, the visitor is introduced to the corridor, regional destinations and the region’s character and history. The exhibits interpret Aiken, Bamberg, Barnwell and Orangeburg counties.

The permanent exhibit walks you through the history of the region starting with the Early Settlements and the people Working the Land.  There is also a hands-on component where visitors can touch animal pelts that the early traders would have sold.  It covers the Railroads that were crucial to our area as well as the Civil War. There are several interactive exhibits including this push-button exhibit on the experiences of a Civil War soldier. It finishes with the important industries in the area (new and old) and Recreation and Leisure, which covers our golf and baseball history and our favorite local parks.  The exhibit features three “trolley cars” with exhibit panels on the inside and touch-screen interactive kiosks that highlight local SCNHC heritage sites.

Model of North Augusta In 1910

This model of North Augusta was created on an HO scale by Kelley New and Mike Teffeteller of Design Concepts in Augusta, GA. The model shows seventeen historic structures that existed in North Augusta in 1910. Of the seventeen structures, eight have been lost to fire, disrepair, or progress.  For a description of the model, click here. 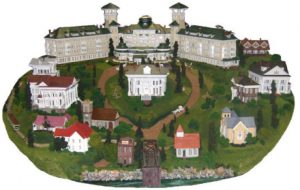 This quilt was created by the CSRA’s Pieceful Hearts Quilting Guild to highlight the history of North Augusta upon the city’s 100th birthday in 2006. The PHQG generously donated this quilt to the Arts and Heritage Center upon our grand opening in July of 2009.

The quilt features images from both the past and the present day North Augusta, including the historic homes of Rosemary, Lookaway, and the Knox family. It also shows the character of our beautiful town with images of young children playing basketball and the old train trestle decorated with banners cheering our local teams on. 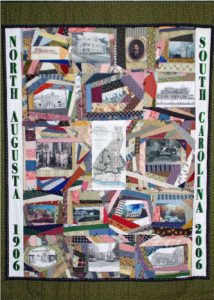